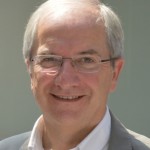 Jordi Varela, Editor of the blog “Advances in Clinical Management“

The socioeconomic status influences the consumption of goods and services in each community in a very obvious way, a phenomenon which logically includes hospitalisation rates. But in what sense does poverty or wealth determine hospital utilisation? And what role does the accessibility to the number of installed beds in the community play in hospitalisation rates?

To try to answer these two questions I will examine two projects, an English one and an American one that emphasise two different hypothesis, the first one being based on the influence of poverty and the second one, on the installed capacity.
The English analysis. Hypothesis: poverty is crucial

This paper uses as a clinical measure, a closed list of 19 “Ambulatory Care-Sensitive Conditions (ACSC )”, such as heart failure or diabetes complications that should not be a reason for admission if primary care had the capacity to globally treat these patients. Regarding the assessment of poverty, the study uses a socioeconomic quintiles index measuring various deprivations (Index of Multiple Deprivations: IMD 2010). 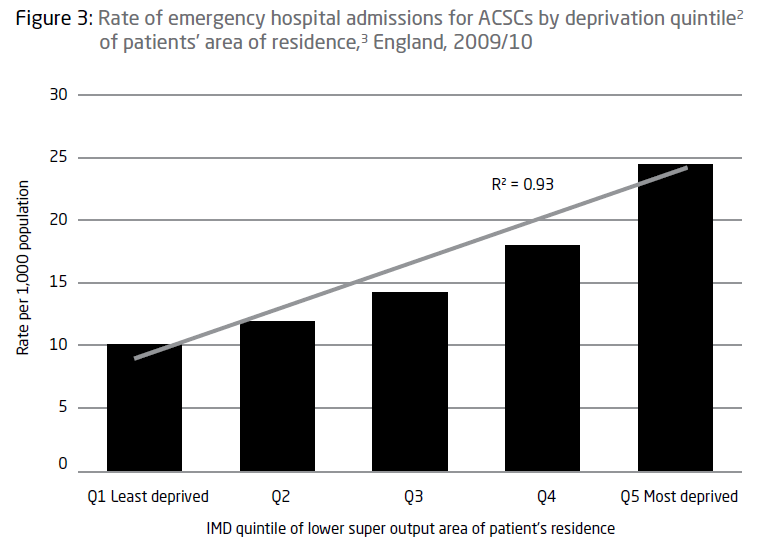 The ACSC rate of hospitalisation for the population of Q5 communities (the most deprived) was 24.5 per thousand inhabitants per year, more than double the 10.1 observed in the population of Q1 (the most affluent). Therefore, this English project tests the hypothesis that poverty is a key vector in consumption (in this case inappropriate) of health resources, such as the admission for conditions that should be treated at the level of primary care.
It should be noted that in this study, the number of hospital beds that are available to each of the communities studied is not taken into account.
The American analysis. Hypothesis: the capacity is crucial
Wennberg’s team grouped the studied communities in quintiles according to one condition: the average economic family income observed in the census. To measure the clinical resource consumption, they studied Medicare clinical billing (left panel) and the hospital stays (right panel) for the last two years of life of people who died having had documented diagnoses of chronic diseases. Each illustrated point represents a university level hospital. 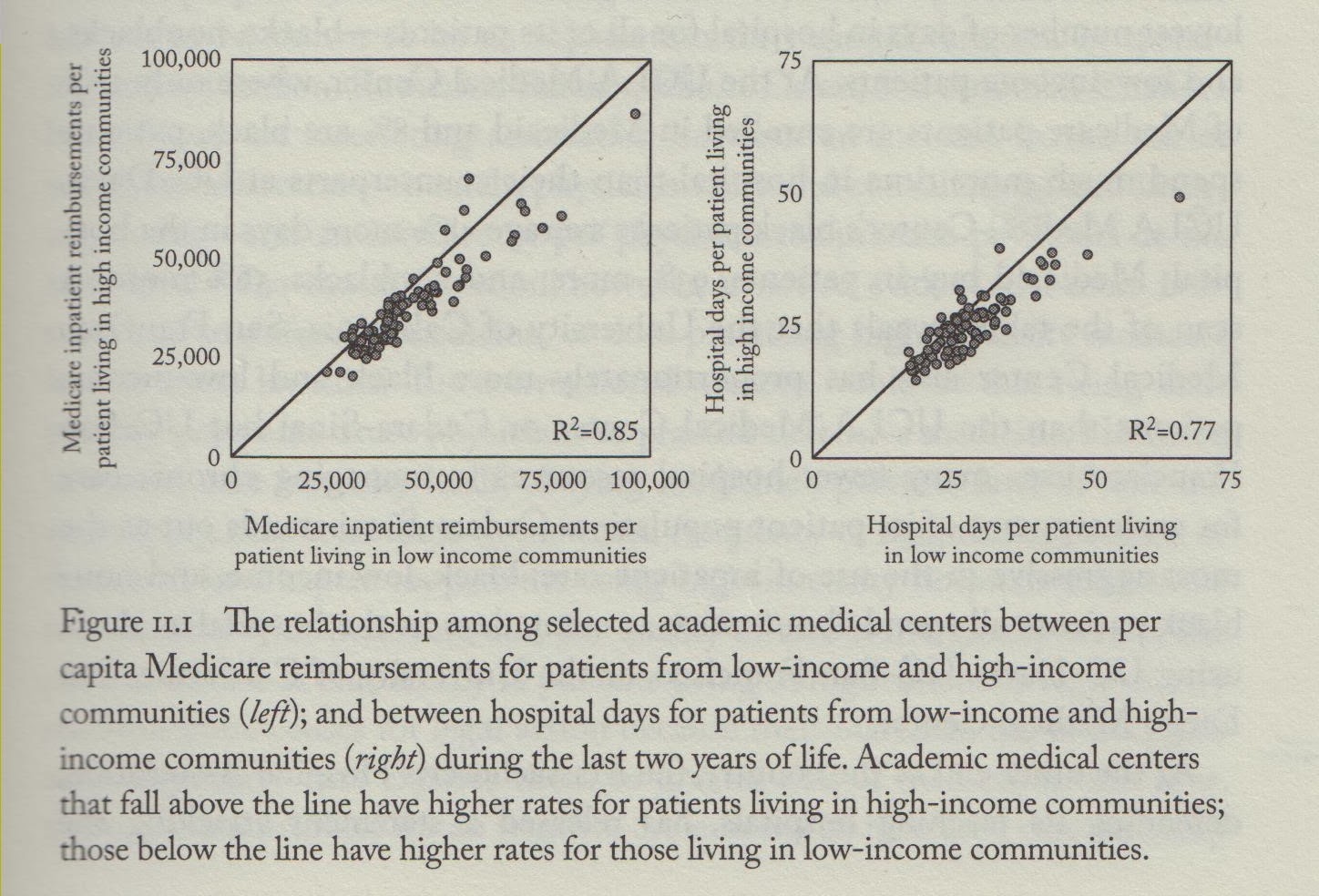 The two graphs above show that patients from communities with less income have a hospitalization rate highly correlated statistically with patients from more affluent communities (recall that the researchers measured the hospital stays occurred during the last two years of life). This correlation has a value of 0.85 in Medicare billing and 0.77 in hospital stays. Note that some hospitals that have the point above the regression line show more stays (and billing) of patients from the most affluent communities, while on the contrary there are points below the regression line representing centres showing more hospital stays (and billing) of patients from the most economically depressed communities.
Observe in the correlation of points, that there are university centres (at the top right) admitting the studied patients, both of economically low and economically high level, sometimes twice, or even more than the centres with points in the lower left side. Wennberg explains that when he studied at the Boston University Hospital, the number of poor people admitted was very low, and this was only because the hospital capacity for these patients was smaller than that for the population with a higher social level. Conversely, the number of patients with low socio-economic status admitted in the last two years of life into the UCLA Hospital (Los Angeles) was 20% greater than the patients from higher economical levels.
The following chart explains the direct correlation of 0.54 between the rate of beds per thousand people in a community and the rate of hospitalization for chronic patients. In this case the points correspond to territories. Observe in the lower side of the graph, the antithetical behaviour of femur fractures, which show a constant rate of hospitalization irrespective of the number of installed beds. 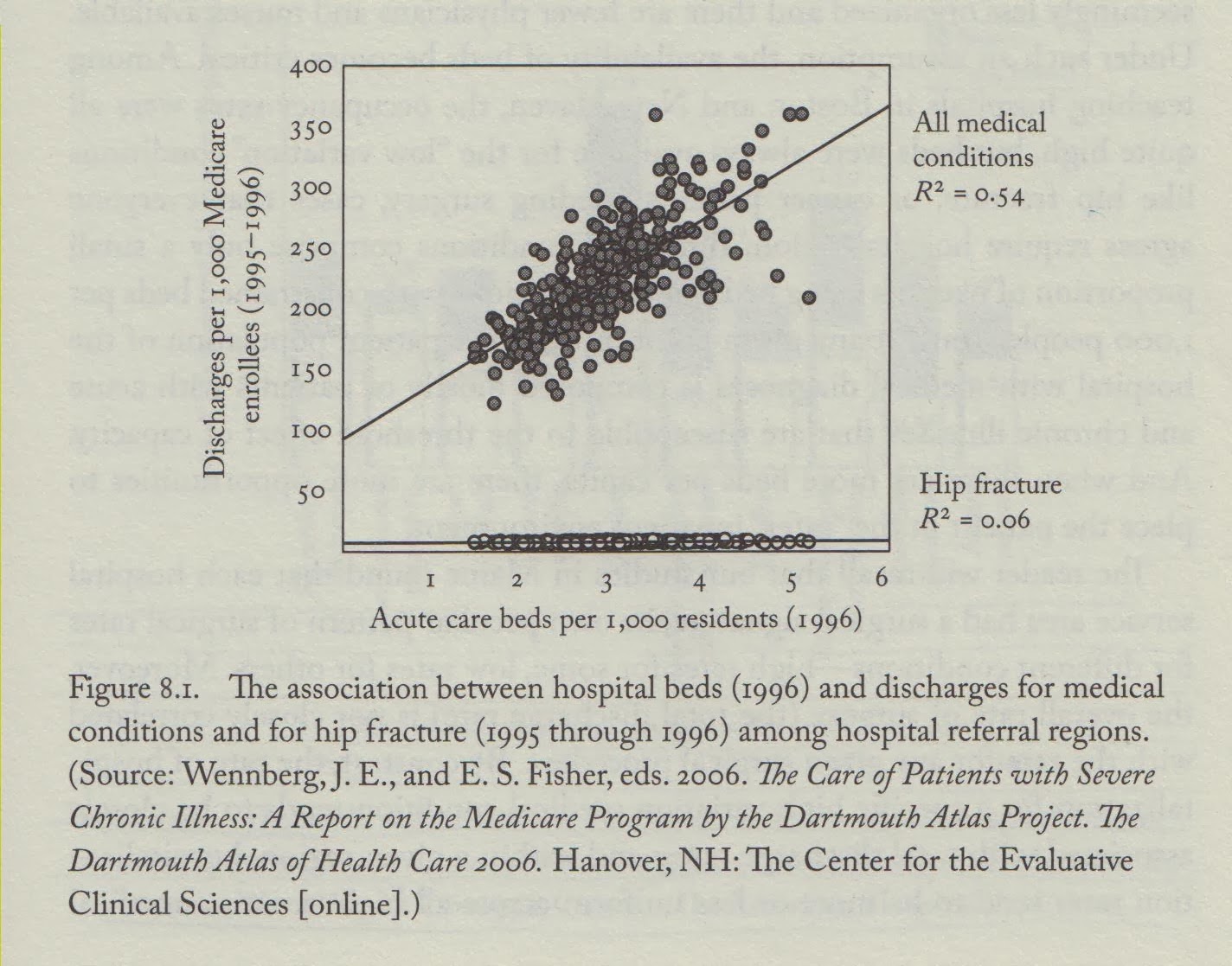 It seems then, that it is the availability of beds, and not the social class, that defines more clearly the number of hospital admissions for chronic medical conditions.
Discussion
Although the two hypotheses seem contradictory, I think the two vectors, both poverty-wealth and the amount of installed beds are determinants, each in their own way. In Consorci Sanitari de Barcelona  studies the rate of hospitalization in the public hospitals was higher in neighbourhoods of a working tradition, whereas in the more affluent neighbourhoods while the public care service use was lower; when the private care was taken into account the overall consumption was higher.
In short, the accessibility is crucial in explaining the variability of resource use, but in the end, it’s the number of available beds that more significantly marks the hospitalisation rates, as Wennberg endeavours to demonstrate, the game rules of the system are almost minimalist: more beds more admissions.
Bibliographic reference