That is the question. The strength of the link between research and health policy looks different depending on the perspective. Health service researchers expect that their work has more impact in politicians’ decisions while the politicians expect to be informed about the most effective way to ease the configuration of health policies based on scientific evidence. This is a difficult transition bridge whose surface is eminently communicative.

The “Web first” section of the influential Health Affairs, this month features a paper on the use of social media and the researchers’ perceptions and it’s worth reviewing (Grande D et al, 2014). During the Academy Health Annual Research Meeting, 215 researchers were interviewed using a mix of techniques (cases, assessment of broadcasting’ effectiveness and open qualitative questions). In the cases’ section, three ways of communicating research results to policy makers were presented: traditional media, social media and direct contact with decision makers: The social media includes the blogosphere and different social networks, particularly Twitter.

Although social media is considered as effective as traditional media or direct contact, the confidence in the broadcasting method, the respect for the scientific community and its contribution to the academic promotion are valued less if the chosen means of distribution is social media. So, if you want to be credible, respectable and promotable, you better leave blog posts and tweets for more trivial matters. However, the paper covers a detailed analysis according to the academic level of the interviewed researcher distinguishing between participants, partners and associate professors with expected and suggestive results, as illustrated below: 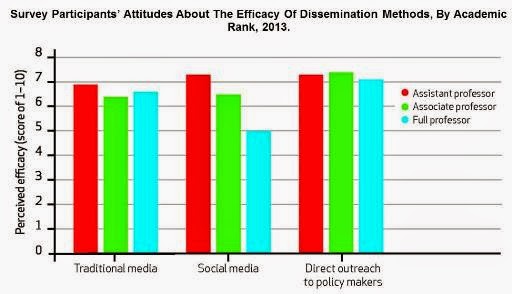 Communication through social media is perceived very differently among the three groups, being considered by assistant professors, the younger group, as more effective than traditional means and equally effective as direct contact. With these results, it’s not surprising, noticing in the chart below, that only 21% of researchers are using blogs as a means of broadcasting and 14% are using Twitter:

A huge social media perception disparity, derived from the degree of knowledge and experience, persists. But what is yet more surprising is the tendency to regard the media as substituting rather than complementing. In the same way that an action of communication through direct contact is more effective if it is reinforced with a previous publication, the same can be expected if a social layer to the broadcasting of this publication is added. I’m sure the authors of the study appreciate posts like this which broadcast the results that will soon show up on paper.