A key element for completing the stratification of population in risk groups is information system. It’s necessary to have a database that integrates information collected from different health records and therefore, in order to meet this demand, the population morbidity database was created.

The point is that every day there is more and more emphasis on the need to provide patients with a comprehensive and integrated health and social care, but the analysis and evaluation of this care can not be carried out correctly with fragmented information systems, on the contrary: it must be done starting from the integration of the data these contain.

The population morbidity database is based on a system of related tables that pivot around the users table, which includes the main data of the insured patient (demographics or health status, to name two examples).

Currently, there are three more tables: the diagnostic, the contact with health services and the pharmacy, but this type of structure relatively easily allows incorporating both information from new records (outpatient clinics, dialysis, respiratory therapy, etc.) and new tables with other relevant information, such as results of clinical findings:

Figure 2: Structure and content of the population morbidity database. The clinical determinations table in gray is not yet implemented. 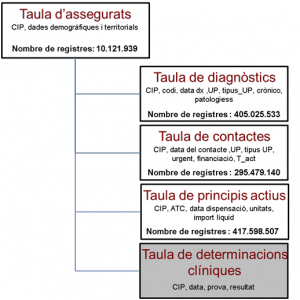 The population morbidity database integrates information from the following records:

The possible uses of the population morbidity database are multiple: the population stratification, the specific analysis of certain health problems (broken femur, IC, COPD,…), the development of population indicators of efficiency in the use of resources, etc.

We can conclude that, for the volume of data that integrates, this database has the characteristics of a structured “big data”, with a considerable capacity for growth and adaptation to new requirements and data sources and offers enormous possibilities for analysis.

Next 15th April is the new deadline for submitting article abstracts for the Preventing Overdiagnosis Conference which will be held in Barcelona at the end of September 2016.

Who is this congress aimed at?

This congress is open to the whole society; for this reason, the congress is not only aiming at health care professionals, but also welcomes the participation of patients and all other citizens.

What do we understand by overdiagnosis?

Overdiagnosis is defined as the diagnosis of an illness which would not produce symptoms during a person’s life, but the treatment and follow-up, to which this person could be submitted, would not produce any benefit, and can even be harmful and generate costs.

Yes, on an individual level, the consequences of overdiagnosing go from the negative effects of unnecessary labelling, damage as consequence of medical tests (radiation effects, false positive or false negative tests), unnecessary therapy (surgery, medication) and, on a more demographic level, one of the consequences of overdiagnosing refers to the opportunity cost, generated by a misuse of resources which could have been assigned to prevention and treatment of real illnesses.

What can we read on overdiagnosis?

We recommend the section “Too much medicine” of BMJ, the section “Less is more” of JAMA, the recommendations made by the Project Essencial and the book “Overdiagnosed. Making People Sick in the Pursuit of Health”.

Yes, indeed. We’ll be expecting you for the 4th edition of the International Preventing Overdiagnosis Conference, which will take place on 20th, 21st and 22nd September in Barcelona. Taking into account the congress program, it will be an ideal setting to share initiatives and work for the future.

If you want to read more on this subject, you can read this other blog post.

The broadest definition of overdiagnosis refers to its consequences: negative effects of unnecessary labelling, damage as consequence of medical tests (radiation effects, false positive or false negative test results), unnecessary therapy (surgery, medication) and the opportunity cost, generated by a misuse of resources which could have been assigned to prevention and treatment of real illnesses.

Well-known examples of overdiagnosis are the screening programs for the detection in an early stage of cancers, which would never cause neither symptoms in nor the death of a patient, or ever increasingly sensitive diagnostic methods, detecting the smallest of abnormalities which would remain benign anyway (incidentalomes). Also the progressive reduction of diagnostic thresholds can eventually lead to invented disorders and to the fact that healthy and asymptomatic persons could be classified as sick while they are not, receiving treatments with higher risks than possible benefits.

Let’s go back in time. The concept of overdiagnosis has been described for the first time approximately 50 years ago, in relation to cancer screening, but the term doesn’t become popular until the year 2011 through the book “Overdiagnosed. Making People Sick in the Pursuit of Health”. At present, overdiagnosis is discussed in some sections of prestigious scientific publications such as the BMJ (Too much medicine) or the JAMA (Less is more), and is the subject of some specific congresses as now the Preventing Overdiagnosis Conferences. In our specific context, there are also initiatives, such as Choosing Wisely and the Essencial, who work out recommendations to avoid clinical practices of little value and include subjects related to overdiagnosis.

Even with the knowledge presently available, overdiagnosis is still facing important challenges. A consensus on a formal definition is still missing, and under the umbrella of overdiagnosis, we still see a wide range of clinical situations gathered, requiring different approaches both from the scientific point of view, as well as from the perspective of necessary strategies to minimise the impact of overdiagnosis.

In order to meet these challenges, we need to deepen our knowledge of the methods used, in order to get an estimation of the frequency of overdiagnosis, as well as develop efficient communication strategies to avoid the confusion that situations of overdiagnosis can cause, both among patients as in society in general, the impact on the doctor-patient relationship (trust), or the potential jeopardy to patients who have already been diagnosed.

These challenges, together with the economic, social and ethical impact of overdiagnosis, its causes, facilitating elements and consequences, the new genomics tools and their possible impact on overdiagnosis, as well as matters related with overdiagnosis and aging, are some of the subjects which will be addressed during the 4th edition of the International Preventing Overdiagnosis Conference which will take place on the 20th, 21st and 22nd of September in Barcelona. You can read a previous post about it here.

The Agency for Health Quality and Assessment of Catalonia (AQuAS) is participating actively in the organisation of this international initiative, which gathers institutions like the Centre for Evidence Based Medicine from the Oxford University (UK), the Dartmouth Institute for Health Policy & Clinical Practice (USA), the Centre for Research in Evidence Practice of the Bond University (Australia), the Consumer Reports and the British Medical Journal (BMJ) and Public Library of Science (PLOS) groups. 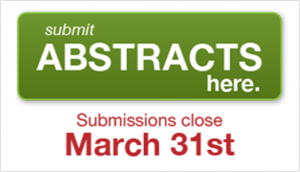 Important information: Until the 31st March [deadline extended to April 15th], abstracts can be submitted without any thematic restriction, as long as they’re related to overdiagnosis prevention. You can register now.

We’ll be expecting you there!!!

Not too long ago, our grandparents, and even our parents, would be given closed envelopes at the practitioner’s, with the results of medical tests or reports that one healthcare professional would send to another one. Patients were mere couriers of the information regarding their very own health. Surely, more than one would not “respect the rules” and open the envelope, to read what actually belonged to them.

Things are very different now. The democratisation of society; the better education of citizens, at all levels; the growing concern about all issues regarding our health, be it physical, mental, emotional or social, or the fact that information flows fast, have occurred in parallel to the great technological revolution, which has dramatically changed many aspects of our everyday life. And amidst this change of paradigm, apps have appeared.

There is an app for each aspect of our daily life, and instead of helping make it easier, it ends up gets more complicated. Health is no exception, obviously. There are said to be more than 100,000 health apps now, of which less than 20% are addressed to the management of specific diseases, such as diabetes or depression. The rest of apps are included in what is called wellbeing apps, which promote healthy lifestyle habits.

Within this new situation some questions are bound to arise: Will apps change the way we interact with our health and the healthcare system? Which is the best app to treat a particular disease? Are all apps appropriate for any kind of person? Do they add value to everyday practice? Are they effective? Will there be a day when healthcare professionals would prescribe the use of an app, along with a drug or a diet?

So far, there is no clear answer to these questions. It is widely accepted that the technological aspects -data safety or interoperability- should be validated. But what about validation of their contents? Is there some kind of scientific evidence behind the recommendations made by the apps? How should we validate their efficacy and cost-effectiveness?

In the recent Mobile World Congress in Barcelona, the attendants of a conference on the role of apps in lifestyle changes, most of them with a technological background, concluded that a renowned institution was needed to assess or validate the current bubble of health apps; this should be done, however, without thwarting innovation. It seems now that the concern on separating the wheat from the chaff is becoming obvious even to developers. 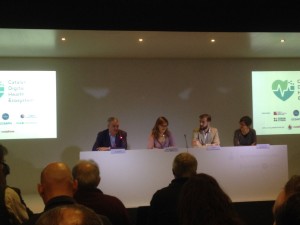 A brief about digital health topics during the Mobile World Congress, here. 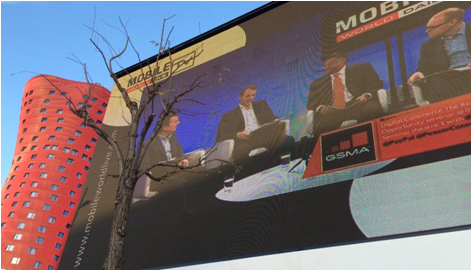 Barcelona is Mobile. The great mobile world exhibition has not gone unnoticed to the city. With a record 100,000 visitors, the Mobile World Congress took place last week in Barcelona, under the theme “Mobile is everything”. Considering the innovations presented in it, it appears that healthcare is also becoming mobile (mhealth).

The massive mobile technology world fair gathered mobile operators, technology manufacturers, providers, distributors, and content providers who presented the industry’s latest innovations. According to Genís Roca (@genisroca), the contents  of this year’s Mobile World Congress has turned around these 6 topics:

Three of these large trends have very clear applications in the field of healthcare.

The first topic is graphene. The Catalan Institute of Nanoscience and Nanotechnology (ICN2), in collaboration with research centres from Barcelona and the Autonomous University of Barcelona, has presented a group of graphene electronic sensors that can be used to detect the electrical activity of the brain. The early detection of an epileptic crisis could be possible in patients suffering from epilepsy and implanted with these sensors. The implanted device on the cortex would alert the patient by, for instance, sending an alarm signal to an external mobile device.

Virtual reality has been the main character in the congress, or at least, the one that caused more anticipation. This was best seen in the long queues to visit Samsung’s roller coaster or SK Telecom’s submarine. 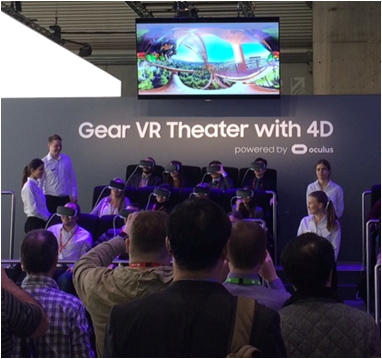 Virtual reality applications are starting to appear in the field of mental healthcare. Thus, startups such as MindWave (with their project HealthVR) or Psious offer treatments to tackle phobias, fears or generalised anxiety by exposing patients to virtual reality images, in some cases as part of a cognitive behavioural therapy.

The mobile industry will undoubtedly continue to evolve, and its applications in the field of healthcare will grow even more. I was lucky to attend the course Mobile Thinking Days-Digital Health (organised by Mobile World Capital Barcelona, IESE Business School and RocaSalvatella), and one of the key messages that appealed to me is that any product subjected to digital pressure will end up transformed into a service (Genís Roca dixit). Therefore, a big challenge of mhealth will be to offer disruptive, quality services that meet the patients’ needs. 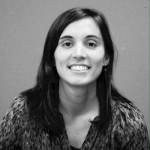