Within the framework of the Programa de Millora de la Pràctica Clínica (Programme for improvement in Clinical Practice) of the Vall d’Hebron University Hospital – VHIR Institut de Recerca (VHIR Research Institute) and in collaboration with the Essencial project, work has been done to explore what barriers health professionals (hospital doctors and nurses) come up against in order to implement clinical recommendations aimed at reducing inadequate practices or those of low clinical value. A group of 15 health professionals (with medical or surgical specialities) collaborated in two discussion sessions to identify these barriers. The work done by Dimelza Osorio of the Vall d’Hebron University Hospital and by Liliana Arroyo of the University of Barcelona has been really outstanding.

When talking about inadequate practices or those of low clinical value, we are referring to inappropriate health interventions in certain circumstances, whether it be because the risks involved outweigh the benefits, because their efficiency is not proven or because there is not a clear cost-benefit correlation. These low value practices are present in everyday clinical practice and can lead to an over-diagnosis and/or over-treatment, meaning diagnosing or treating a clinical condition in which there are no notable health benefits for patients.

The barriers identified can be classified into four levels: micro, meso, macro and those of the context. At a first level (micro), those deriving from the characteristics of professionals themselves were identified, such as the tendency for self-protection in the face of claims or legal problems (defensive medicine), dealing with uncertainty or having had bad experiences previously; scepticism towards scientific evidence as a result of out-dated or contradictory information; other attitudes of professionals such as inertia or resistance to change; and the lack of training. All these constitute barriers. Patients’ characteristics were also identified, such as their reluctances and demands; the figure of the expert patient or beliefs acquired in the past.

At a second level (meso), barriers as a result of the interaction between professionals and patients were identified. Some barriers have to do with the relationship between professionals; that is to say, difficulties related to clinical leadership, the coordination between different professionals (or specialists), or the cohesion within teams. There are also barriers of organisational leadership such as a lack of institutional support in legal issues, the inertia of the organisation itself, economic incentives, wrongly applied penalties or the lack of foresight of certain costs. And then barriers of information flow, namely, the inefficiency of information systems such as the lack of operating capacity of e-mailing, or intoxication due to an excess of corporate information.

At a third level (macro), barriers are influenced by the structure and management characteristics of a hospital and the Catalan health system. The healthcare conditions stand out, such as the burden of healthcare, the duration of the attention given to patients, or how much technology is used in care, that is, greater access to facilities and tests. But also the design of the health system, such as in the lack of systemic leadership, or the lack of coordination between different levels of healthcare (primary care, hospital care, social healthcare, ….) . And then also the characteristics of the health system like territorial differences and the legal and bureaucratic context.

Lastly, certain external factors to the health system (the context) can also lead to low value clinical practices persisting. Although a lot less present in this case, the political context and the influence from the media are included.

The importance of each barrier is shown in the following graph: 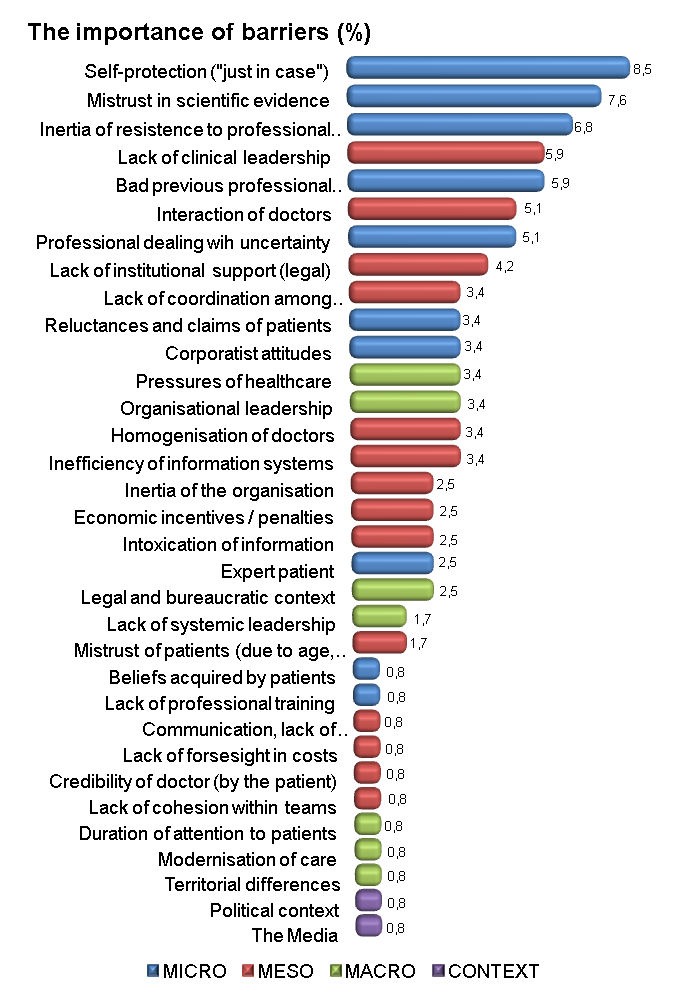 Potential solutions were explored or proposed in the same session so as to eliminate these barriers; a series of solutions have been proposed mainly related to the creation of a leadership strategy and a series of clear options, which require rationlising processes and using available information properly.