At present, if you live in the region of Terres de l’Ebre and need to be operated on to have a knee replacement, it is quite probable that the type of technique used is one which preserves the posterior cruciate ligament. On the other hand, if you go and live in Girona, the chances of having the same kind of knee replacement will be a lot less, but in contrast, the type of technique chosen will be that of stabilising the posterior.

Why does this happen? There is no evidence to suggest which type of intervention is most suitable and it is simply the fact that the health professionals of one region are more inclined than those of another to choose one technique over another. This variability reveals the existence of schools linked to certain hospital centres that condition the choice of the type of intervention or technique used.

This is the type of information that the Atlas of variations in clinical practice of the Catalan Healthcare System (SISCAT) make available to health professionals and the entire population, and which has been led and developed by AQuAS since 2011.

The aim of these atlases is to identify, describe and reduce the variability that can lead to increased well-being, quality and an improvement in the use of available resources. Up to the present, 7 atlases have been developed in which the variations in hip and knee arthroplasty operations have been analysed, as well as the variability in home-based respiratory therapies (oxygen therapy, mechanical ventilation and continuous positive airway pressure), the variation in intravenous thrombolysis in patients with ischemic stroke and the variability and in renal replacement therapy in patients with chronic kidney failure (haemodialysis, peritoneal dialysis and kidney transplant).

One of the sources of data for this study, in fact, the most widely used, is the basic minimum group of data obtained at the time of a hospital discharge (CMBD-AH, the Catalan acronym) where the results are presented as activity rates, reasons for standardised uses and variability statistics. The methodology that lies behind this initiative can be seen here. The basic strategy of all the analyses is to compare the rates of use (numerator: for example, hospital admittances) of the inhabitants in a region (denominator: for example, basic area of health), regardless of the centre where patients have been treated or admitted. In addition, both the rates and the reasons for use are reflected in maps to better visualise the data which is another interesting point nowadays.

Apart from all this, it is important to stress that all the atlases include actions and recommendations for planners (Health Department), insurer (CatSalut), providers and professionals, and which have been developed by a unique team of experts with whom the results of the atlases are discussed.

This year, we have decided to take another step forward and convert the publications we have had till now in a static format (PDF), into dynamic publications that facilitate greater interaction with the data and, therefore, a more global view of the clinical practice analysed.

This is an example of the visualisation of the interactive hip and knee arthroplasty atlas which feeds off the data in the Catalan Arthroplasty Registry (RaCat): 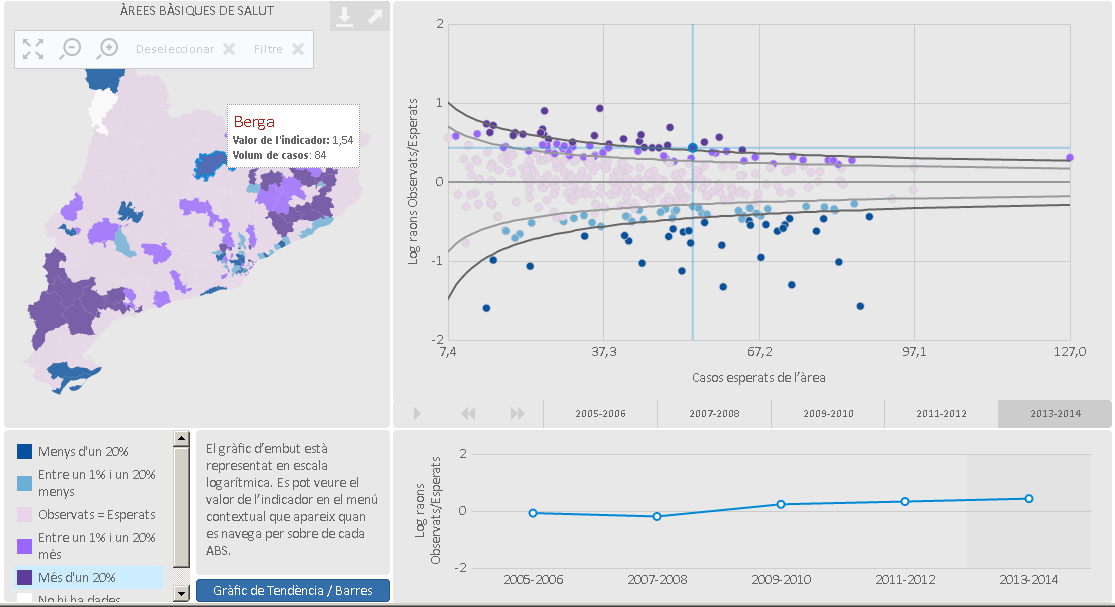 Next year, you will be able to know whether there are variations in the Catalan territory regarding hospitalisations for back surgery, in the repair of abdominal aortic aneurysms and in gastrointestinal cancer surgery (esophagus, pancreatic, liver, stomach and rectal cancer).

We cannot end this post without thanking all the speakers that made the presentations seminar of the Atlas of variations in clinical practice of SISCAT possible last 21 November, and especially to Enrique Bernal-Delgado, the key professional in the analysis initiative and in mapping the variations of clinical practice in the Spanish National Health System.

As far as AQuAS is concerned, it is one of our work lines which was begun some time ago now which has recently generated publications such as this article on respiratory diseases and this article on kidney disease.

And I ask myself, …. now that we have the tools to identify and describe the variability in clinical practices which are carried out in Catalonia, why don’t we try and explain them? The atlases of variations in clinical practice of SISCAT are a key tool to ask ourselves questions.