The implementation of improvements, changes in procedures, the introduction of good practices in specific health contexts and the new regulation regarding the assessment of health technologies, respectively, are subjects on the agenda at the AQuAS. Today, we will look at them in broad terms and in the future we will delve into them in more detail from this space.

From her talk we highlight the idea of building collective knowledge and identifying the barriers and facilitators in implementation, the time factor and the value of assessment.

It is also important to know the theoretical and conceptual framework of implementation and the “basics” of implementation science which is useful for any project being implemented, as is designing and following an adequate plan of action. 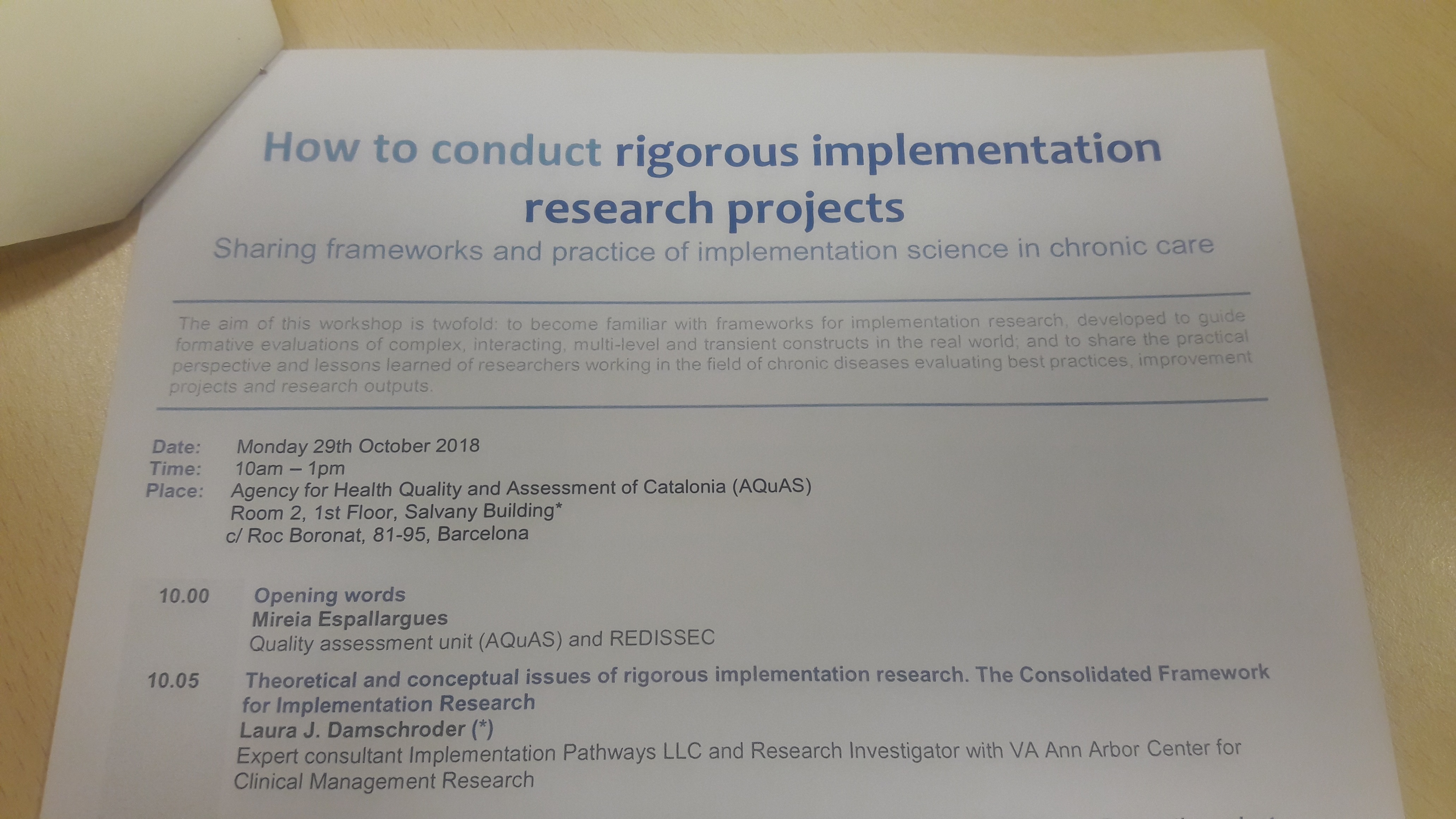 The workshop proceeded by looking at different examples of the implementation of good practices in the context of REDISSEC, the Health Services Research on Chronic Patients Network.

It all stems from the annual meeting of this network held in Madrid last week at the Instituto de Salud Carlos III, in which the idea of organising this workshop was put forward in order to bring some of the contents of the meeting closer to the Catalan context, with the participation of the AQuAS, the Hospital del Mar, and the Fundació Avedis Donabedian.

In terms of the AQuAS, three talks were given on projects in which implementation research is being done, with a different perspective in each case:

This workshop was a good opportunity for speakers and attendees to share experiences and knowledge.

Moving on to the second subject.

In terms of the new European HTA regulation, which is in its final stages of discussion in the European Parliament, Iñaki Imaz, from the Instituto de Salud Carlos III in Madrid gave a seminar which we were able to follow live at the AQuAS.

It was very interesting for many reasons. Situations were contextualised that justify the need for health technology assessment (HTA) as a starting point, which is always present in our context.

The emphasis was also placed on the complexity of assessment and the different possible scenarios (or levels). On the other hand, aspects being discussed regarding the proposal for legislation which would allow for, among other objectives, joint clinical assessment at a European level, were commented on in detail.

The seminar can be found on the following link:

Imaz I. The future of health technology assessment in Europe. Regarding the proposal for regulation passed by the European Parliament. Madrid: Agency for Health Technology Assessment. Instituto de Salud Carlos III, 30 November, 2018.

Talking about HTA in Europe, a lot has been done (more than 30 assessments available within the framework of EUnetHTA), there is work in progress and, above all, there is the desire for all to gain in terms of confidence, guarantees, transparency and the sustainability of health systems. What is especially sought after is to avoid duplicities and to share knowledge and methodologies.

We will keep track of all these subjects.