Last week, Barcelona hosted the Mobile World Congress 2019. From AQuAS, we attended the Health and Wellness Summit which takes place within the framework of 4YFN. Very relevant subjects were dealt with regarding technology and digital health putting the spotlight on artificial intelligence, data analytics, aspects of safety, user experience and health systems.

Apart from what was presented, we were able to read about different experiences and news regarding the lack of women among the speakers. 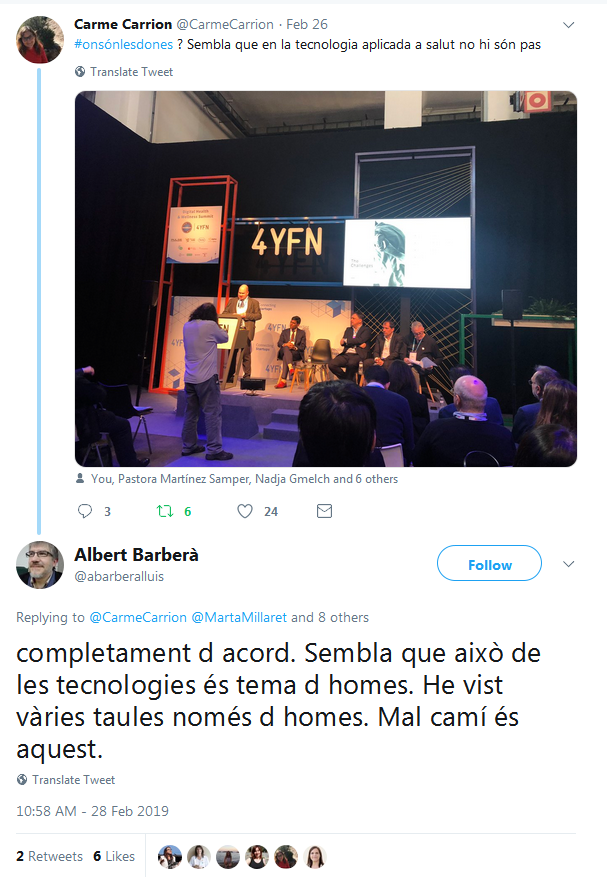 For this reason, today, 8 March, International Women’s Day, we interview Rossana Alessandrello, electronics engineer specialised in bioengineering who works in a world of technology and health, two environments with their own characteristics. Dolores Ruiz Muñoz, epidemiologist and public health technician specialised in gender subjects, conducted the interview.

What are the people you work with like? What responsibilities do women have and what roles do they tend to play in your sector?

Men. I work in a world of men and I would say that there are differences with the roles of women in the ICT. While men are more daring and reckless, women are not. Women provide the element of feasibility and bring ideas down to earth. My feeling is that without women, men would not accomplish anything. We bring everything down to earth in every way. We make work plans operational, from a management, legal and social perspective.

What have your men or women bosses been like?

Men. And I see it as my own limitation. I do not take enough risks. I make things possible but I am not sufficiently audacious. That is my reality, my framework. I provide the creative part but “taking the plunge” is what I lack. I have worked with American, Swedish and Catalan bosses, both in private and public companies. It would not seem to be a coincidence. I am not saying that there are no women technological entrepreneurs, there are some. In my opinion, they have attained leadership positions because they have been able to take advantage of “the plunge” that men take and so jump themselves.

How do you see the future?

I see the future positively. For me, the collaboration between men and women is a very positive collaboration, and it is a necessary synergy. It is just a matter of accepting differences and taking them into account. I consider myself to be an enterprising person. I have built up my professional career which has ranged from offering specific products to managing teams. I have chosen and managed my own career and made my decisions.

In the context of innovation, do you have the perception that there are gender biases? For example, in subjects where innovation is prioritised, the way innovation is done or in any other aspect?

There are no biases. No biases at all. We all want to innovate. Perhaps there is a nuance in the fact that female innovation is always oriented towards improvement and impact. In this respect, I would go so far as to say that there are differences. An example of this would be the case of Bill Gates when he considered creating an operative system without being very sure at the time of the implications it would have in the long run. In my opinion, women on the other hand, work with a creativity that always includes a reason, an end aim or an objective. It is not a paradigm of innovating for innovating’s sake. The other paradigm would be “a challenge as a challenge”.

If we ask the general public whether they can mention the name of a woman known for her contributions to the ICT world, they would probably have considerable difficulty. It is probably because of this that there are international awards and initiatives exclusively for women and that their equivalent does not exist for men. For example, I am thinking about the EU Prize for Women Innovators 2018, Women IT Awards, International Girls in IT Day and Women in Health IT Community.

Most of the projects of public procurement of innovation in which we are working on from the AQuAS were begun by men. We should ask ourselves whether it is because women are not in the appropriate positions or whether it is for other reasons. Similarly, the majority of SMEs that tender for these projects are led by men.

What do you think about quota policies?

I think other things need to be done. There is a real need to train, to educate, to prepare ourselves in equality in the defence of ideas and to encourage this aspect from the time we are very young girls. School has a role in all this and it needs to go a step further and the communications media too.

I have often been “the woman” in meetings and I have been treated differently because of this. Things are constantly happening to me which I do not think would happen to men. Recently, in a meeting I was given a kiss on the forehead as a show of “thanks” for an idea. Further back, in another meeting, I remember that I was pregnant and that they introduced me with the phrase “This pregnant lady, please be kind to her”. I am sure they are experiences which arise from a “naturalness of affection” that I have normalised, as a woman, to be able to move forward professionally. I have many anecdotes like these. I would say that in some sectors, such as in mine which combines ICT and health, things are very much like this at the moment.

Would you like to mention anything that I haven’t asked you about?

Yes. I have had the experience of not having being able to opt for a position of responsibility because of being on maternity leave. It was an American company, at a time of change and fusions. At that time, I experienced firsthand that in the “male world” not being permanently available was not acceptable. I hope things have changed.

Thank you very much, Rossana and Lola!

It has been a year since we published a text by Iria Caamiña from this space about needing to put on our gender glasses. Are we still in the same position?

From AQuAS, we strongly support the incorporation of gender perspective in our day to day and in our work lines. Gender perspective? Yes, absolutely. And also new technologies, research, assessment, data analytics and innovation.

We would like to end this text with this video from EIT Health about women and innovation in health.