The Real Time Delphi method, which implements the functionality of the Internet to make the Delphi Method more flexible, efficient and transparent, has been used by the Agency for Health Quality and Assessment of Catalonia (AQuAS as per the Catalan synonym) to identify the indicators for evaluating chronicity care and for the management of the areas of improvement in this field.

¿What is the Delphi method? It is a structured communication technique which is based on a panel of experts who answers questionnaires in two or more rounds. After each round, a facilitator provides a summary of what the experts have said in the previous round. Successive rounds are intended to reach a consensus on the subject. The Delphi method is applied to make predictions about the future and, in general, for any issue when a scientific approach is not possible. When the Delphi method is online (Real Time Delphi) the responses of the participants are calculated automatically and many variants of the method can be entered in a controlled way. 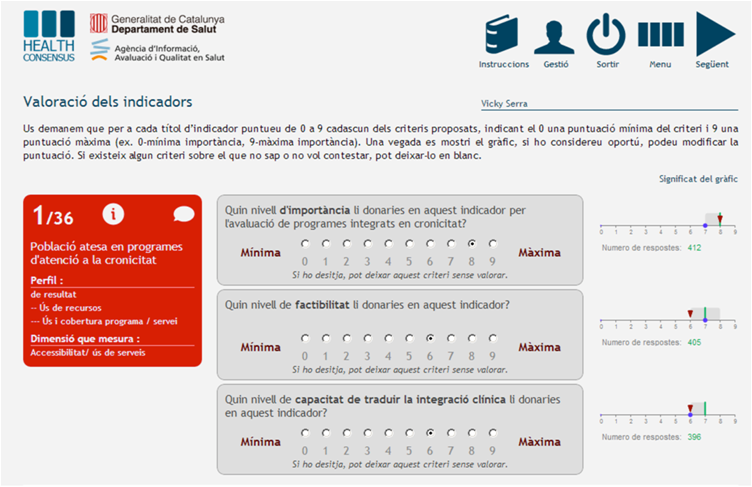 The Health Consensus application that facilitates the participation of professionals through a methodology of online consensus developed by the company Onsanity from research done at the Universitat Politècnica de Catalunya (UPC) in Barcelona was used to identify the most appropriate indicators.

The work was carried out in the years 2013-2014, the first prototype of the system was applied twice, first in Catalonia, and a second version in the context of all the Spanish health system. The Health Consensus application for the selection of indicators allowed for the collecting of contributions from more than 800 health professionals, including clinical profiles of management and planning. An initial list of 215 indicators was progressively reduced through successive rounds of consensus until it was reduced to 18.

Not only did this experience allow the the identification of indicators, but it also showed various aspects that are interesting for research  and innovation:

What has happened in periods of economic crisis has also occurred at other moments in time and in other contexts. It is also a well-known fact that this can lead to an increase in mortality rates among the population (both due to general causes, as well as for certain specific causes, such as suicide), an increase in mental health problems and a worsening of lifestyles. We also know that inequalities in healthcare can increase, particularly as the crisis affects the most vulnerable members of society first.

The second report from the Observatory on the effects of the crisis on public health, publicly presented just before the Christmas holidays, closely monitors the principal socio-economic and health indicators at a territorial level (by regions) and analyses their evolution. It also analyses the relationship between socioeconomic and health indicators and provides information to define, or redefine, strategies aimed at tackling the effects of the crisis based on the needs identified through the report.

The fall in public revenue triggered a decrease in the budget, including the budget of the Department of Health, which was especially significant between 2011 and 2013. The health sector was forced to adjust, doing the same work but with less resources, improving efficiency while making every effort to do so without hindering the quantity and quality of healthcare service provision. However, in the period 2007-2013, life expectancy increased by 1.8 years (1.5 in women and 2.6 in men), as has been the case for life expectancy in good health.

Nevertheless, the impact of the economic situation on people’s health is evident: the unemployed have worse self-perceived health, especially those who have been out of work for over a year and present a higher risk prevalence of poor mental health. Similarly, tobacco sales, which is on the decline population-wide, increased among the unemployed, especially among men. Excessive alcohol consumption levels are also higher among the unemployed.

Focusing the analysis on the most vulnerable social groups, the report compares the population group aged 15 to 64 years, in other words, those who are exempt from the pharmacy copayment rates (basically unemployed people who have lost the right to unemployment benefits, receiving social insertion benefits, or have non-contributory pensions), with those who are subject to copayment. In Catalonia, in 2014 there were 187,775 people aged between 15 and 64, exempt from copayment rates (2.3% of the population). Those who were exempt are statistically twice as likely to consume psychoactive drugs that people subject to co-payment and have 1.5 times greater likelihood of being admitted to hospital. This group made 1.4 times the number of visits to primary care, and were treated in mental health centres 3.5 times more than the other group.

There is no question that public, social and economic policy has an impact on a population’s level of health and that they modulate the influence of socioeconomic, gender and immigration factors on health inequalities. Social protection policies seem to be effective in cushioning the influence of macroeconomic fluctuations on mortality rates. Policies aimed at equality contribute to improving health inequalities. The consequences of the crisis in Russia in the early 90s had little in comparison with those suffered by Finland during the same period. The main reason for this being the policies implemented by both governments.

Given the complexity and the multiple impacts produced by economic crises, the public policy-centred method to mitigate its effects must be approached from different sectors. Tools like the Interdepartmental Public Health Plan (PINSAP), as per the Catalan acronym, are key to ensuring this cross-sectoral approach, targeting factors which impact health to reduce or eliminate health inequalities. Another fundamental step is to maintain social protection (unemployment benefits, retirement benefits, family assistance, etc.) to mitigate the decline in family income and its consequences. However, this must go hand-in-hand with policy aimed at generating employment and promoting the rapid reintegration into the workplace. Education policy is the other mainstay, given the relationship between education, income and health, and the fact that it acts as a “social ladder” between generations. Policies aimed at the most vulnerable groups, such as lower income families and children, also deserve special attention.

Finally, it is essential that the implementation of these public policies are evaluated in the medium and long-term in order to continually validate their utility and impact, and to enable policymakers to adapt these programs to meet an ever-changing environment.