Developing a platform based on mHealth that has mobile applications (apps), a game and intelligent sensors has been the goal of the European project  PEGASO Fit For Future, which began in December 2013 and ended last July.

It is a platform that aims to improve both the lifestyles of adolescents (diet, physical activity and hours of sleep) and the knowledge that they might have about these life styles. To achieve this, intelligent sensors (t-shirt and bracelet) which record the physical activity and hours of sleep of an individual and also different apps which record the intake of food by means of a diary and footsteps taken by means of an accelerometer were developed and tested.

The PEGASO Fit For Future platform detects which lifestyles a user has and makes recommendations on how to improve them. In addition, it incorporates a gamification component: based on how healthy the lifestyle of a user is as well as how much their knowledge improves, which are then converted into obtaining a greater or lesser amount of points.

As an example, here we can see a screenshot of a fictitious user: 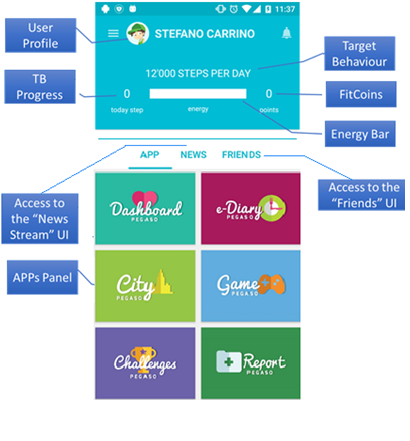 There were two different phases of the project: the development phase of the platform and the assessment phase.

During the development phase, while some professionals put their efforts into ensuring the quality and appropriateness of the medical and clinical content of the platform, others concentrated on aspects of a technological nature.

Nevertheless, the opinions of the end users themselves, adolescents, were always kept in mind during this process. In three iterative stages, boys and girls in Catalonia, Lombardy, England and Scotland tested this technology out in the different stages of its development.

The proposals for improvement made by the adolescents including their preferences were, whenever possible, kept in mind for the later versions of the platform. The aim was to guarantee as far as possible that what was being developed was practical for and accepted by the end users.

To this end, a pilot study was carried out with adolescents from Catalonia, Lombardy, Scotland and England in which 365 mobile phones with the PEGASO platform installed were used by adolescents.

After six months of use, the intervention was assessed by means of validated questionnaires, a qualitative methodology and data obtained from the platform itself. A control group was introduced allowing for comparisons to be made with adolescents that did not have access to the platform.

The results of this study will help to evaluate whether new technologies are practical in helping adolescents improve both their lifestyles and knowledge about these lifestyles, a population group accustomed to using new technologies and that, in general, do not often visit health professionals.

Getting closer to the population by using mobile technology and the recreational aspect of gaming could be a good strategy for an intervention of this type related to the promotion of healthy lifestyles among adolescents. At a population level, it is a long-term strategy and hence the slogan “Fit For Future” of the PEGASO project.