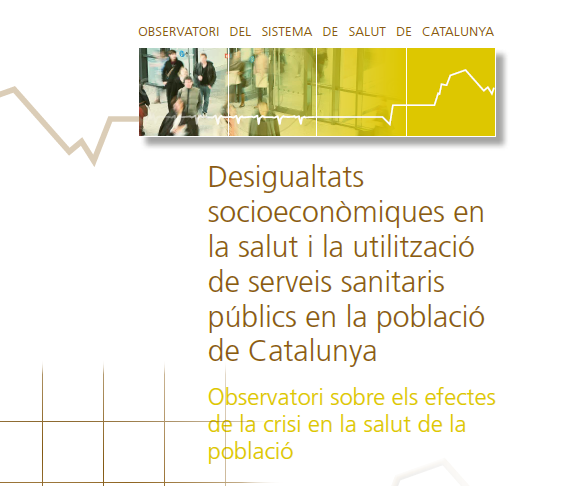 What has happened in periods of economic crisis has also occurred at other moments in time and in other contexts. It is also a well-known fact that this can lead to an increase in mortality rates among the population (both due to general causes, as well as for certain specific causes, such as suicide), an increase in mental health problems and a worsening of lifestyles. We also know that inequalities in healthcare can increase, particularly as the crisis affects the most vulnerable members of society first.

The second report from the Observatory on the effects of the crisis on public health, publicly presented just before the Christmas holidays, closely monitors the principal socio-economic and health indicators at a territorial level (by regions) and analyses their evolution. It also analyses the relationship between socioeconomic and health indicators and provides information to define, or redefine, strategies aimed at tackling the effects of the crisis based on the needs identified through the report.

The fall in public revenue triggered a decrease in the budget, including the budget of the Department of Health, which was especially significant between 2011 and 2013. The health sector was forced to adjust, doing the same work but with less resources, improving efficiency while making every effort to do so without hindering the quantity and quality of healthcare service provision. However, in the period 2007-2013, life expectancy increased by 1.8 years (1.5 in women and 2.6 in men), as has been the case for life expectancy in good health.

Nevertheless, the impact of the economic situation on people’s health is evident: the unemployed have worse self-perceived health, especially those who have been out of work for over a year and present a higher risk prevalence of poor mental health. Similarly, tobacco sales, which is on the decline population-wide, increased among the unemployed, especially among men. Excessive alcohol consumption levels are also higher among the unemployed.

Focusing the analysis on the most vulnerable social groups, the report compares the population group aged 15 to 64 years, in other words, those who are exempt from the pharmacy copayment rates (basically unemployed people who have lost the right to unemployment benefits, receiving social insertion benefits, or have non-contributory pensions), with those who are subject to copayment. In Catalonia, in 2014 there were 187,775 people aged between 15 and 64, exempt from copayment rates (2.3% of the population). Those who were exempt are statistically twice as likely to consume psychoactive drugs that people subject to co-payment and have 1.5 times greater likelihood of being admitted to hospital. This group made 1.4 times the number of visits to primary care, and were treated in mental health centres 3.5 times more than the other group.

There is no question that public, social and economic policy has an impact on a population’s level of health and that they modulate the influence of socioeconomic, gender and immigration factors on health inequalities. Social protection policies seem to be effective in cushioning the influence of macroeconomic fluctuations on mortality rates. Policies aimed at equality contribute to improving health inequalities. The consequences of the crisis in Russia in the early 90s had little in comparison with those suffered by Finland during the same period. The main reason for this being the policies implemented by both governments.

Given the complexity and the multiple impacts produced by economic crises, the public policy-centred method to mitigate its effects must be approached from different sectors. Tools like the Interdepartmental Public Health Plan (PINSAP), as per the Catalan acronym, are key to ensuring this cross-sectoral approach, targeting factors which impact health to reduce or eliminate health inequalities. Another fundamental step is to maintain social protection (unemployment benefits, retirement benefits, family assistance, etc.) to mitigate the decline in family income and its consequences. However, this must go hand-in-hand with policy aimed at generating employment and promoting the rapid reintegration into the workplace. Education policy is the other mainstay, given the relationship between education, income and health, and the fact that it acts as a “social ladder” between generations. Policies aimed at the most vulnerable groups, such as lower income families and children, also deserve special attention.

Finally, it is essential that the implementation of these public policies are evaluated in the medium and long-term in order to continually validate their utility and impact, and to enable policymakers to adapt these programs to meet an ever-changing environment.

A few days ago, Anna Garcia-Altés in a previous post referred to the Nobel Prize in Economics, which Alfred Nobel never granted – that was awarded in 2015 to Angus Deaton and his work on inequality. This is not the subject that I wish to talk about today but another that also features in the recent book from this Nobel proze winner which is titled “The Great Escape” (The Great Escape). Yes, just like the movie, set in a German camp for prisoners of war starring Steve McQueen and recalling a real fact of World War II. Unlike reality, the book predicts a better ending. For Deaton, the greatest escape in human history was in overcoming poverty and ageing.

For centuries, those who did not die at a young age could face years of misery. Beginning in period called the Enlightenment, with its scientific revolution and subsequent later industrial revolution, some people in certain countries began to escape this meagre fate.

Meanwhile, germ theories founded in the late nineteenth century surpassed the paradigm of the miasma theory in explaining contagious diseases. The key was and still is scientific knowledge and its dissemination. This point in history marks the extraordinary increase in life expectancy, initially for the better-off and then for the rest of the population.

This higher life expectancy, manifested especially in the developed countries, is largely due to the remarkable reduction in infant mortality and, more recently, to the epidemiological transition to chronic non-contagious diseases, the improvement in life expectancy in adulthood (increased life expectancy ≥ 50 years from 1950), but without a substantial improvement in longevity. Deaton shows us all this with data and graphics.

To illustrate it, Deaton mentions the progress in combating smallpox with a vaccination of smallpox (initially using matter from infected people and later the much safer vaccine Edward Jenner introduced in 1799). The public health measures introduced in the last few hundred years, including sanitation, water supply, nutrition and better hygiene, have led to a significant reduction in infant mortality.

Here, it was due to not only the knowledge but also the determination of the authorities in improving the conditions of the population. The improvement in life expectancy in adulthood is explained largely by reducing cardiovascular mortality through diagnostic and therapeutic advances in this field.

As mentioned before, we witnessed not only increased life expectancy but also a significant increase in the world population, an authentic explosion starting in the second half of the twentieth century. Malthusian alarms re-emerged but they were fortunately overcome by improvements in agricultural productivity, without excluding initiatives – for better or worse – for controlling the birth rate in developing countries; again, examples of scientific knowledge and its dissemination.

This external help, whether from governmental or NGO sources and despite the illusion that might it create if it continues as usual, may end up doing more harm than good. There’s no shortage of examples in the book of wasted resources by governments and corrupt politicians, granting donations or grants to countries (government to government) without these ever reaching the people. Not to mention situations where these grants are part of the geopolitics of the former colonies or contemporary powers.

Contrary to what an engineered hydraulic vision (communicating vessels) may show, we must invest in projects and programs that promote conditions for economic development to make external aid unnecessary, as is the reality in Africa, where paradoxically, the more external help yields the least growth in GDP per capita.

Health aid, without underestimating its achievements (vaccination campaigns, infrastructure construction, drugs against HIV / AIDS, mosquito nets), continues to be in most cases, vertical health programs with a very specific focus. This contrasts with the horizontal programs aimed at strengthening local health care systems, especially a good network of primary and community care.

Often foreign aid and the development of local capacity are not aligned; on the contrary, often one damages the other. Rich countries’ subsidies to their agriculture – consider the famous European PAC – is detrimental to farmers in poor countries where most of the workforce still works the land. There are more effective ways to help.

(It notes that another Nobel laureate in economics, Robert Fogel (1926-2013), had already written about the great escape in “The Escape from Hunger and Premature Death, 1700-2100” (2004), Deaton and had revised appointment. Thank Anna Garcia-Altés to call me about this)