Nettie Maria Stevens (1861-1912) belongs to “the other half of science”: the half that is made up of women who have often been forgotten by history. The glowing obituary which appeared in the Science journal refers to her as Miss Stevens, even though she held a Ph.D. and the centre where she worked (Bryn Mawr College) had offered her a research professorship. Stevens was a researcher in several fields of biology, but her most prominent work was performed in the determination of the chromosomal basis of sex.

After completing her teaching studies at Westfield Normal School (now Westfield State University) in Massachusetts, Stevens worked as a teacher and librarian. However, one of her professors, a disciple of the great naturalist Louis Agassiz, awakened her interest in biology. In 1896, when Stevens was 35, she began studying at Stanford University (California), a modern institution that admitted women and allowed students to choose their own courses. In addition, enrolment was much cheaper than in the universities of New England, where she lived. She graduated in 1899 and published her first article, based on research from her Ph.D., which described two new species of protozoa and changes in the chromosomes during cell division.

In 1900, Stevens moved to Bryn Mawr College, Pennsylvania, which was renowned for its research into cytology. Thomas H. Morgan, a prominent researcher in genetics, evolution and embryology (Nobel Prize in Physiology or Medicine, 1933) directed her doctoral thesis. While preparing her thesis, Stevens received grants for stays in Germany (University of Würzburg) and Italy (Anton Dohrn Naples Zoological Station). Upon completing her Ph.D., she remained at Bryn Mawr College to lecture and continue her research.

The hypothesis that sex could be determined by one chromosome that was different from all the others – then called the “accessory chromosome” – had already been suggested in 1902 by Clarence E. McClung (1870-1946), but it was Nettie Stevens who proved it with her experiments. The first article on the accessory chromosome, published in 1905, was a careful cytological study with 241 drawings made by Stevens herself of what she observed through the microscope. The article proved clearly that all eggs tested from the mealworm beetle Tenebrio molitor, had 10 chromosomes of equal size, while the spermatozoa could contain a set just like that of the eggs, in other words, 10 chromosomes of the same size – or 9 chromosomes of equal size and one smaller chromosome (see figure 186 and 187). In the first case (all the spermatozoa of equal size) always produce females, while in the other (with one smaller) produced males. In addition, somatic (non-reproductive) cells from males always possessed the smaller chromosome.

Some of Stevens’ illustrations 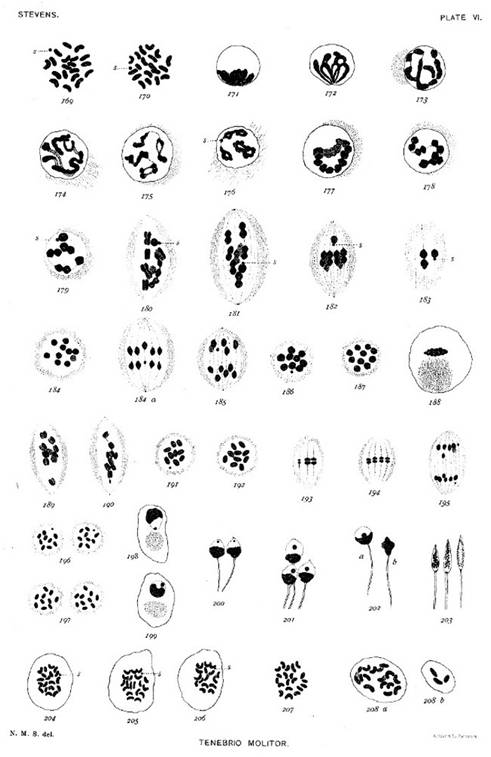 At the same time Stevens was performing this work, Edmund B. Wilson (1856-1939), who was working independently, described a similar dimorphism in insect spermatozoa. There was no rivalry between both scientists nor did either scientist claim priority of their discoveries. However, many texts attribute the discovery solely to Wilson, despite the fact that he himself stated in the article in Science outlining his observations: “… one of the chromosomes in the male is much smaller than the corresponding one in the female (which is in agreement with the observations of Stevens on the beetle Tenebrio)”.

Unfortunately, Nettie Maria Stevens’ career as a scientist was short-lived. She died in 1912 at the age of 51 from breast cancer. 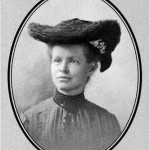 Studies in spermatogenesis with special reference to the “accessory chromosome.” Article by Nettie M. Stevens, 1905, which describes the study that confirmed that sex was determined by a chromosome which, was different in males. Available from the Project Gutenberg.