Several month ago, we spoke about the publication of the article A global call for action to include gender in research impact assessment, in which the team of impact of research at AQuAS participated.

Investment in biomedical research has grown exponentially over recent years and consequently, governments, the industry, research centres and citizens expect to see a return on this investment translated into an increase in health benefits. Investing in research inappropriately can lead to economic and health losses. What’s more, this investment can also be wasted if it is not distributed equally in terms of gender.

That women are poorly represented in the field of health research is nothing new. By poorly represented we are referring to them as researchers as well as participants in research studies. Women receive less funding, appear less frequently than men as authors of publications in scientific journals and are awarded fewer scientific prizes. For example, of the 210 Nobel Prizes of physiology and medicine, there are only 12 women (5,7%).

Moreover, there is evidence that the differences in sex (biological) and of gender (sociocultural) are not included in a routine way in the design of research studies. This can mean that women find themselves at a disadvantage with regards to men as beneficiaries of research in terms of the health, economic and social impact associated with research. It has been demonstrated that incorporating the gender perspective stimulates innovation and excellence in research and technology.

Given the global and fragmented nature of research, we are faced with the inescapable need for all administrations, research institutions and assessment agencies to promote scientific policies that maximise the impact of research by means of gender equality. 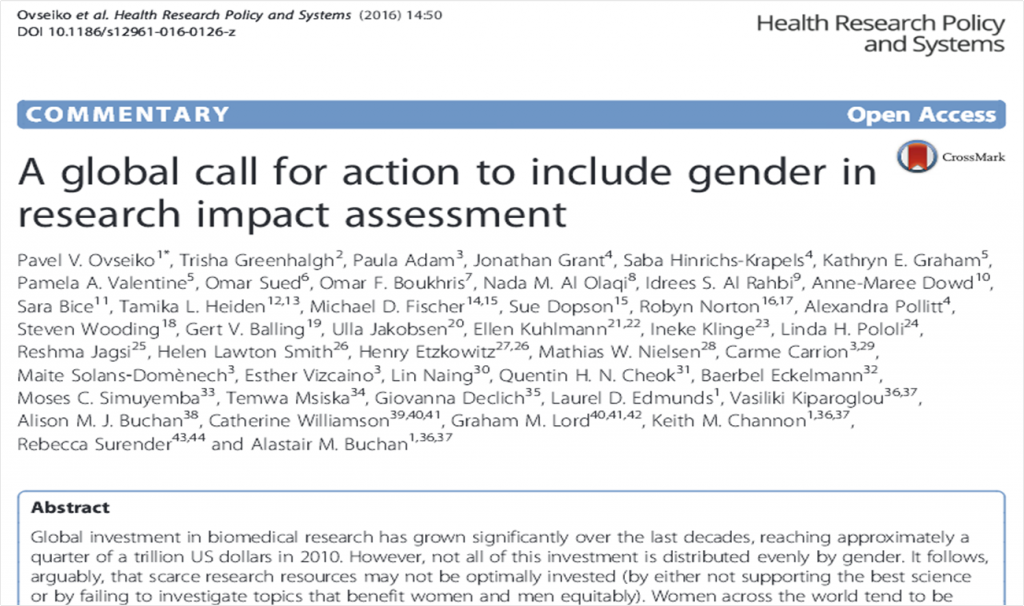 Taking this necessity into account, researchers from 15 countries from 6 continents have made a “call for action” in the article to include the gender perspective in the assessment of the impact of research done with the aim of maximising its scientific, economic and social impact. Different recommendations are made in the article to all actors involved in research on how to include and reinforce gender analysis within the assessment of the impact of research.

In 2014, the United Nations launched a campaign, HeForShe, to fight against gender bias at a global level. This campaign wants to involve everyone, including men and boys, as defenders and agents of change to obtain gender equality and the rights of women.