Traditionally, knowledge in medicine was considered an exclusive domain of medical professionals. Patients were passive subjects that listened to a diagnosis while hardly understanding it and followed, or not, the instructions they were given by the doctor. Nowadays, an attempt is made to provide patients with enough basic medical knowledge to allow them to interact with the doctor, take decisions about their health and avoid making mistakes that could have serious repercussions.

One of the subjects discussed at the 2016 European Health Forum Gastein (this Forum is an annual gathering organised by the European Commission in Bad Hofgastein, Austria, to discuss subjects related to health which affect European countries) was health literacy or, otherwise known as, the ability to access the relevant information for one’s own health or that of society and to be able to understand and assess it. It refers to the understanding of what the doctor tells the patient and the information contained in the patient information leaflets that accompany drugs. It also refers to the ability of identifying whether the information on health in the media is reliable, understanding the information on food labels and also participating in activities which improve health and well-being.

The first European Health Literacy Survey (HLS-EU) was carried out in the summer of 2011. Eight states from the EU took part and the questionnaire centred around three aspects (health care, disease prevention and health promotion) and in four of the phases in processing and informing (access, understanding, assessment and application). 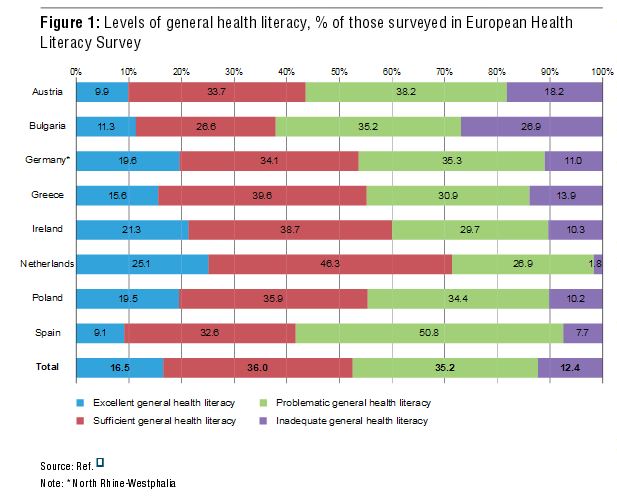 While in the Netherlands 70% of the population have sufficient or excellent knowledge, in Spain, this percentage is 41,7% and it is the area with the highest percentage of problematic situations (50,08%).

Similar studies done in the United States indicate that a lack of health literacy carries risks, puts the breaks on the self-management of an illness and increases medical visits and hospital admissions and therefore, the expenditure on health.

Health literacy is not parallel to the degree of literacy in general. For example, the consumption of homeopathic products, the resistance to vaccination, or the belief that transgenic products are harmful for one’s health are widespread attitudes in some well-educated sectors with a high cultural baggage but which have a mistaken or biased knowledge of certain subjects on health. Unfortunately, these people believe they are well informed and are probably the population group where it will be most difficult to eradicate this type of illiteracy.